The Pentatonic Scale is foundational in learning more complex licks, scales, and playing patterns. Tons of musicians  on harmonica, guitar, bass, piano, and other instruments will refer to the shape of the scales in their tutorials and various lessons. And of all the scales you could learn, this one is by far the easiest!

This lesson can be applied to any major key on the harmonica, but is designed for the Key of C Major. If you are looking for one in a minor key, we can help you with that as well. If you don’t have a harmonica in this key click here to see why it might be a good idea to have one and for some options for a first harmonica in this key.

The Pentatonic Scale on Harmonica in ANY Major Key

If you don’t read harmonica tabs, that is not problem whatsoever! This is what it is translated to: the number is which hole to play, and the arrows are up for blow and down for draw. More complicated tabs will add in extras, like the ½ shown here, but don’t let that scare you. The ½ simply means to do a half-step bend.

The tab above should read:

And that is how you walk up the Pentatonic Scale.

The great thing about tabs like these are you can play them with any harmonica, as long as the music you’re playing to shares a key with your harmonica.

Here’s a helpful video as another way to learn this scale.

He continues with this same scale up the harmonica. It looks like this:

These are your mid-tone notes in the scale starting and ending with the root note. Now on to the higher end of the harmonica:

Once again, this starts with the root at the high end of the harmonica and walks up the pentatonic scale to land on the root once again to finish out the scale.

This scale is very applicable across many instruments, especially those that harmonica share a genre with. Of course, these tabs won’t help you much with other instruments.

So, knowing that the C Major Pentatonic Scale Notes are all on white keys, this should make it pretty easy to learn (1). 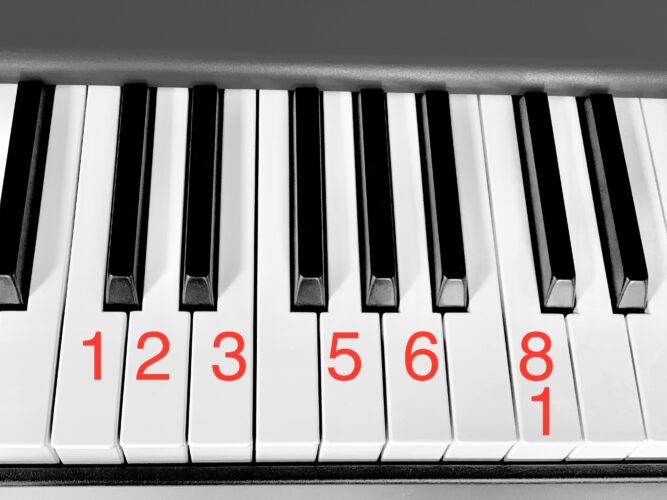 Numbers higher than 8 (seen in notes like Asus9) are notes that specifically ask you to play the suspended second, only an octave up, which is the ninth. With that being said, it is helpful to learn to count up above the 8th, but not necessary for this exercise. 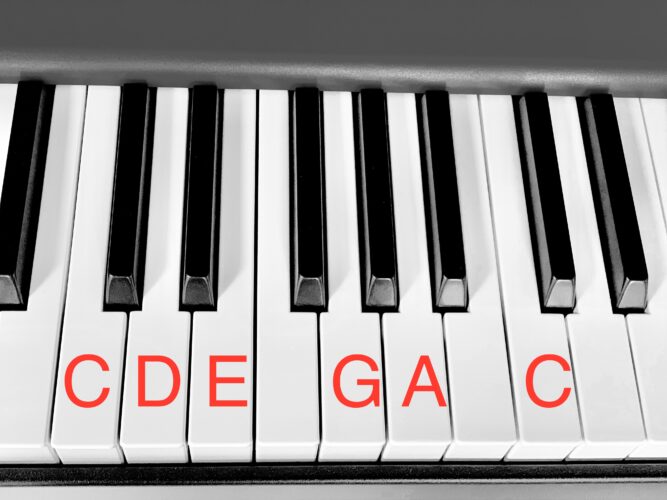 Taking a look at the letters might be helpful for understanding this. Before where we had the number 1, we have the letter C. This is your 1st note and the root note of the C Major Scale and C Major Pentatonic Scale. It has the 1st, 2nd, 3rd, 5th, 6th, and 8th listed, which are the 5 notes of the pentatonic scale and the root note again.

Guitar, in my opinion is the next easiest to learn scales on (2). It truly is not much different than piano, other than the shape you make. Rather than being all in a row, you make a sort of box-shape as you walk up from deeper chords to higher pitched chords.

The Simplified version here, where all the notes as letters are clearly displayed, rather than the notes as numbers. The same shape is applicable to bass guitar as well, since the 4 lowest strings are the same: E, A, D, G.

A great place to try this out would be to grab your harmonica in the Key of C and try jamming to these tracks. Starting with a bluesy feel, here’s a guitar backing track in the Key of C specifically made for practicing Pentatonic Scales.

If you’re Playing the tabs listed above, you should be playing these notes: C, D, E, G, A. The same notes will be played as soon as you run up to the second tab, which will put you at the middle notes.

If you want a slower take, here’s a great song to practice different transitions around the Pentatonic Scale. Learning how you like to move around the scale can help develop your own style.

Pentatonic scales can be plenty of fun, but make sure to mix it up with some other exercises once you have it down. Otherwise you may get trapped in what many musicians, especially those on stringed instruments, call “the box.”

“The Box” is basically the 5 notes of the pentatonic scale plus the 8th, which is the root note an octave up. These six notes can end up dominating your playing. Since there are extra notes on either end just waiting to be played, you should absolutely make sure you don’t exclude them entirely. It can be a nasty habit to break.

If you are just learning the Pentatonic Scale, don’t worry too much about “the box” since it is a habit that forms down the road after you learn and practice the scale extensively.