Who is Sonny Boy Williamson?

Sonny Boy Williamson was a highly regarded singer and harmonica player, and a major figure of the Chicago Blues club scene. In many ways, he was the ultimate legend, paving the way for Blues and building deep foundations for that music scene. While there is much mystery about his early life, who he was, and where he came from, what we do know was that he was able to write, play, and sing some of the greatest blues work of all time. His lyrics were full of witty and sly humor, playing some of the loudest, most passionate notes one minute, then deep soulful notes the next. His music was often about himself, telling his stories and experiences through his intimate music style.

Sonny Boy Williamson had a way of captivating his audience with impressive harp playing and mesmerizing lyrics. Many of the songs he wrote were upbeat, Soulful Blues, while others had a way of peeling back layers of who he was. Williamson had many classic staple hits during the peak of his recording career in the 1950’s and 60’s including ‘Cross My Heart’, ‘Nine Below Zero’, and ‘Bye Bye Bird’.

His harmonica playing style was overall bright, snappy, and upbeat. He had a unique style of harp playing techniques and maneuvers that many players attempt to mimic today. In the video, you will notice he switches hand placements, and even ends the song snapping his fingers, playing the harmonica, while not holding it at all. His music and aesthetic was powerful, and audiences everywhere could not get enough of Williamson on stage with just his harmonica and a bullet mic.

Many of his other hits, however, had a way of reflecting his mysterious and even slightly suspicious nature, such as ‘Don’t Start Me Talkin’’, and ‘Keep It To Yourself.’ They were much more confrontational, loud songs that revealed his evil his darker side in music. Still, they are considered some of his greatest work.

Compared to ‘Bye Bye Bird’ this song is a lot more lyrical, telling a story while also showing off his incredible harp playing skills. His ability to sing in between incredibly powerful harmonica notes is what drew in his large fan base so quickly. He was truly one of the Best Harmonica Players in the World, and will always be remembered as the pioneer who started it all.

The Career of Rice Miller

No one paints a more controversial picture of their past than Sonny Boy Williamson. Even his birth date is unsure, recorded anywhere from 1894 to 1912. His real name is believed to be either Aleck or Alex Ford, although he was nicknamed Rice as a boy, and grew up being known as Rice Miller.

He spent his early teen years drinking whiskey and drifting around the Deep South playing his music at juke joints and parties. He finally made a name for himself in 1941 when he landed a radio show at KFFA radio station in Arkansas. Williamson and guitarist Robert Lockwood paired together to audition for the King Biscuit Time show, the same show that he would play with many other harmonica players. The show was sponsored by Interstate Grocery Co, and in exchange for promoting the company’s flour products, they were able to play their nightly music on the show. Williamson and Lockwood can be seen performing together on the King Biscuit Time show in this silent footage (1).

In this footage, you will see Williamson slapping away on the harp, and Lockwood keeping up on his acoustic guitar. This footage is said to be taken around 1942 right when Sonny Boy Williamson was getting his start. This show was their big break, and launched them into successful careers as musicians.

Although the footage is silent, you can still hear many of the songs they played and recorded together on the King Biscuit Time show. In fact, you can find the entire album of their recorded work below: 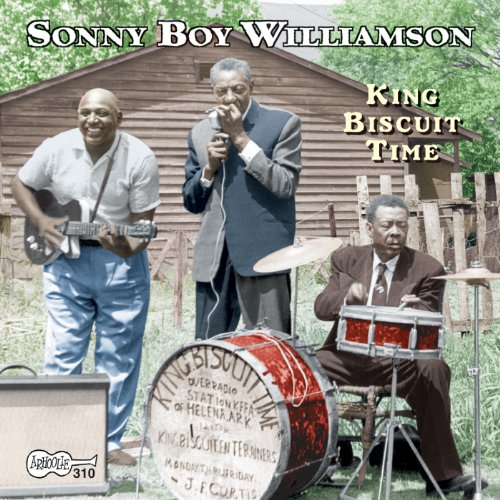 The songs have been remastered for clearer tones and pitch, keeping their music alive. There is even one long track in there that includes a clip from the actual show, and the commercials that were played at the time. The acoustics, Williamson’s brilliant harmonica, and the steady beat of the drums makes for an excellent listen, and a blues music style you just cant find today.

Sonny Boy Williamson had a rich career that took him all over the world, most frequently on European tours as the blues music scene made its way to that part of the world. During his long music career, he had the privilege of playing alongside some of the greatest blues players including Robert Johnson, Eric Clapton, and Jimmy Page, all of who also helped pave the way for the soulful blues music scene. His integration of the harmonica into songs for his own performance or for many others helped shape the way we play the harmonica today. While many artists attempt to play, master, and tweak the harmonica, it is because of artists like Sonny Boy Williamson that we play the way we do to keep the tradition and culture alive in blues music even today.